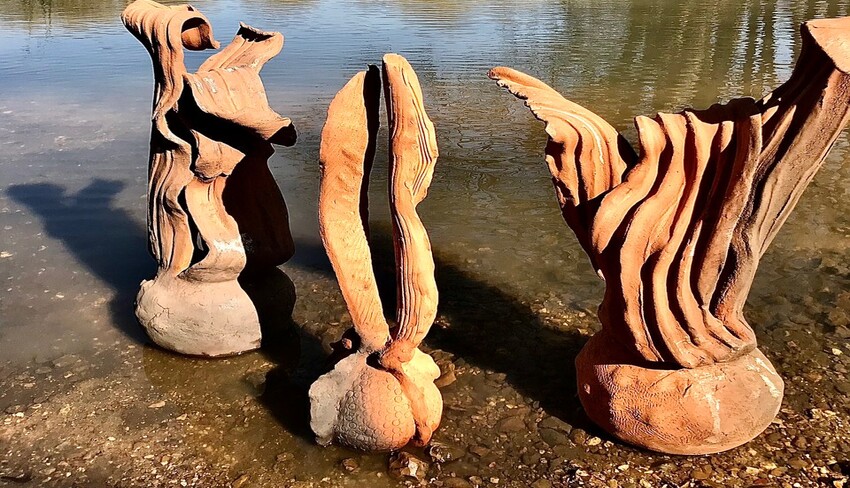 MY ACTUAL WORK IN PRINT

I began by questioning the classical theme of Nature, but in its infinitely small version, by exploring a vision of Nature that tells the mystery of a world invisible to the naked eye: that of a microscopic territory, that of viruses, microbes, mosses and lichens: The torrent of the world in an inch of matter (Cézanne).

By greatly enlarging this “inch of matter” my work naturally leads to abstraction.
My father and son are architects - urban planning, land use plans, ordinance, line, structure are part of my family universe, my horizon lines, the themes I am currently developing.

Graduated from Academy of Fine Art of Bruxelles Belgium

Live in Paris since 30years

In 1993 I founded my private Art School in Paris called « Imagine Studio » where I teach painting, Etching, Mixed Media, ceramic and stone sculpture.

In addition I continue my own studies in fine art at the Pantheon-SorbonneUniversity in Paris in PhD Fine Art Ceramic.

I Teach Art History : - Modern and Contemporary -classes and conferences in Paris.

I have been engraving since 1996 when a friend showed me a variety of printmaking processes.

I worked independently developing the mixed media techniques that I use today.

In 2002, I attended an engraving worshop at The Academy of Fine Arts of Versailles.

There I studied under the strict tutelage of the Korean Master Kim Myong Nam.

After one year, the Master began to appreciate my work and revealed to me the essential elements of her culture : silence, examination and outward journey.

Essence without useless chattering ; the philosophy of Zen.

She encouraged me to take part of The International Engraving Biennial at Seoulwhere I exhibited in 2003, 2005 and 2007.

I represented France and whas nominated for the Engraving Price

My prints are part of the permanent collection The Museum of fine Arts in Seoul.

My works are part of many collection in Bruxelles, and Paris.

I exhibit in the Fine Craft Gallery Arts Council Wilber Mansion in Oneonta NY in 2002 and 2008.

In 2012 I've received the Special Award for my ceramics work in Sèvres : Royal Manufacture of Sèvres

Mostly I start with Etching which is traditionnaly the process of using strong acid or mordant to cut into the unprotected parts of a copper surface to create a design in the metal.

I borne and  grow up in Belgian Congo, and for a couple of years I lived in Pakistan and Afghanistan.

I’ve been raised in “the middle of nowhere”, in the great Africa landscapes always surrounded by the Nature and the bush.
Back to Europe, I study Flemish painting in the Royal Academy of Fine Art in Brussels.

Then I learned all the ceramics technical in a clay studio, and I began to make a life with galleries in Brussels.

I moved to Paris 20 years ago and settle a clay studio in a  old industrial building  in Vanves. The galleries, the group show the “Salons” in the Grand Palais where very attractive

It was the right time to make a living with Art, in 1989 and easy to access.

I develop a very characteristic style coming rightly from the “Flemish ceramics sculptures” close to the eccentric British style   :  a mix of provocative and caricaturist figurative sculptures in clay. Jerome Bosch and Pieter Breughel where my references, at that time.

I realize 5 sculptural installations for Colleges, Libraries, public fountains and so

I used strictly figurative and forms grotesques in the clay to personify some humorous and moralistic subjects about sensuality, sexuality, desire…

I was concerned by the way life use and show how the body is one important part to survive of humanity.

The message wasn’t political or sociological at that time, I was a sort of “self made artist” and had no basic idea about art theory, aesthetic theory, or what else, and I was an “art brut artist”

I had a “clientele” for that sort of Art: the galleries, Drouot-Richelieu and Montaigne sales and the collector who buy this kind of art.

This audience of people was composed with some who partly hate this kind of works and where very verbally violent during the exhibitions, and other really very concerned.

MERITS AND LIMITS OF THIS WORKS

Monsters and fantastic kind of unrealistic creatures where the base of my work this   provocation make a sort of seduction mixed   with attraction for the “bizarre” and repulsion for the abnormalities.

I was  concerned by the easy way to  attract the public with that kind of propose : originality and provocative with a touch of sexuality, and a lot of attractive colored ceramics like the childhood cartoons , there is a certain charm a seduction who might works but I fill like I was tired about that kind of “ knack”.

I begin a new studies program in  Art Therapy at  Descartes University in Paris 5 , and in Saint Anne Hospital in Paris. I was,  during  two   years   an internship in the “Centre de l’Etude de l’Expression et des maladies de l’Encéphale”

Also, during the 2007 summer, I stayed 2 month at  Pathfinder Village in The Kennedy-Willis Center for Down Syndrome in  Edmeston  New-York as an Internship. I learned with Diane Mac Neal the  Art Therapist program.

I worked with the Village residents in   using clay and Nature , constructions with nature and Land Art around the Catskill Nature around the Pathfinder Village.

and the photographer Karl Blossfeldt.

HOW IT FITS IN MY ARTISTIC WORK ?

During the 2007 summer, The Pathfinder Village residence learn me about the  impact and power of nature on human mind : specially in training language for those who have cognitive deficiencies like the Down Syndrome people, pushing the expression on verbalization and creativity.

While I was studying Art therapy, In the same time,  I study also  Master 1 Fine Art in Saint Charles

Those 2 different way to approach Art : versus therapy and versus aesthetic makes a break  but doesn’t stop my personal production.

In the meantime, I participate to different local group show every summer in New-York State.

This year The Upper Catskill Community Council of the Arts in Oneonta –New-York invite me to participate on a female group show from July 20 to September 27.

This exhibition was a great experience in many ways  : I’d an occasion to reconnect my propose on art, and show a new work to the local American public.

WHAT WHERE THE CHARACTERISTICS OF THIS WORK ?

WHERE DO I BEGIN ?

I start to observe the tiny hummingbirds flying around my studio, and learn more about the way they survive: again the process of life in nature showed me a new experience.

I began with drawings realized with big stick of charcoal, on large dimensions pined on my studio walls: the charcoal couldn’t give to many details and offered a very rough result.

Then appear the idea of hummingbird’s vision of world: probably they have a certain vision which attracts them for prefer the brightness red colors, so I had this red color on my drawings.

I use my favorite media : modeling clay and porcelain in particular, fired and white crackle glazed on high temperature.

Seeley’s Potteryin Oneonta gave me a grant to realize this project: 450pounds of porcelain, crackle glaze, and their secret wonderful bright red colors.

I realize in 2 weeks, 15 big white sculptures made for an outdoor location, open-air museum, or sculptural park.

The conception doesn’t use pedestals or any sort of supports.

They are poised on the soil, free-standing.

Some roots, or tentacles, rhizomes, grow from the base, some bizarre red colored buds grow on different part of sort of branches, or bush.

When I began the first form,  I used an old stone founded in the garden to print the surface like a rock.

This process was  an important experience, I continue throw up the clay directly on the concrete soil of the studio, this way to operate gives me directly an interesting surface to begin the construction.

In the same way, I used leaves and flowers part to print on the clay.

From part to part this white smoothie surface looks like a creamy production like “latex” or “sap” coming from a strange vegetable.

DOES MY WORK FIT WITH A STYLISTIC MOUVMENT?

In Africa, the Dogon from Mali used stands up stones in their Cosmogonies

In China the aesthetic emotion inspire the meditation, with the well know “dream stones” like small landscapes

IN THE CONTEMPORARY SCULPTURES

My work is close to Johan Creten  ceramics sculptures : “Ex Natura” showed at the Manufacture national de Sèvres in 2007.

I use clay, water, air and  wood fire, I can be part of the Contemporary Land Art for that reason.

But I work inside the studio, I use pictures, and some elements from nature picked for their strange forms or colors.

In a different way, not like the British land artist Chris Drury directly working in the gigantic proportions of Nature.

The way I organize many different compositions with my sculptures, while I make an installation, offer a variety of atmospheres:  the video and the pictures I make,   print those moments.

Actually, I’m concerned with the materiel,  I think it’s too simple to recognize immediately the clay or the  the porcelain, I try to mix the clay and the synthetic industrial products like “polyester resins”

For that new experience I’ll use plaster moulds and reproduce the same forms organized differently inside the kiln, I would like to experience also the materiel limits: porcelain for example is very easy to deform, that could bring some interesting strange and bizarre creatures.

I know how to make plaster moulds, but I have no idea about the polyester resins , some artistic works have been created with that media : Niki de Saint Phalle , Eva Hess,  Jean Dubuffet, Gilles Barbier, les frères Chapman and so